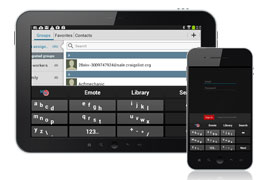 Given Android’s open platform architecture, we have focused our initial efforts on developing a series of  distinct Android virtual keyboards that incorporate our YaYa Key technology and allow the nesting of multiple characters on keys represented on the keyboard. These keyboards are offered on Google play and are intended to introduce and familiarize users with the benefits of our technology.  Our keyboards share the following characteristics and vary only by the the specific key nesting assigned to them: